Roy Joseph Stevens, Sr., known to all of us as R.J., Grandpa and Papa J, was born to M. Roy and Hallie Stevens in Rosenberg, Texas on August 5, 1927. Three days shy of his 20th birthday, he married Pauline McKinney on August 2, 1947. His love and devotion to his beloved Pauline grew stronger each year and this past August, they celebrated their 65th wedding anniversary. 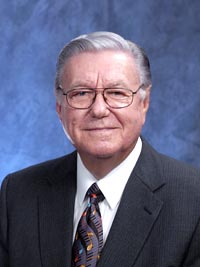 R.J. loved the Lord with all his heart and at a young age decided to devote his life to preaching the gospel of Christ. He was a preacher for over 65 years. He served as a local evangelist for 36 years with churches of Christ in Texas, Oklahoma and California. In 1983, he and Pauline moved to Kemp, Texas. At the same time, he decided to do full-time gospel meeting and singing school work, which he continued doing for churches throughout the United States until early this year. In the last several years, he served as an elder of the church of Christ in Kemp, TX.

R.J.’s passion for music was evident to everyone who knew him. From 1945 to 1951, R.J. studied music at Abilene Christian College, the University of Houston and Oklahoma A & M College. R.J. wrote, co-wrote and arranged hundreds of songs and hymns throughout his life. In 1987, he compiled and co-edited with Dane Shepard, the “Hymns for Worship” hymnal. In recent years, he, Dane and his son, Tim, published the Hymns for Worship Supplement hymnal. He was a member of the Favorite Hymns Quartet, along with Tim, Don Mullins and Dane Shepard, for 30 years. They released 15 recordings together. R. J. was also the director of the Oklahoma Singing School, conducted each summer on the campus of Eastern Oklahoma State College in Wilburton, Oklahoma. Over his lifetime, R.J. instructed hundreds of men and young men to become effective song worship leaders. He always believed that worshiping God was a privilege and that we had a responsibility to offer God our very best in singing praises to our Lord and Savior. Someone once said publicly, “R.J. has taught us how to worship, not just to sing.” 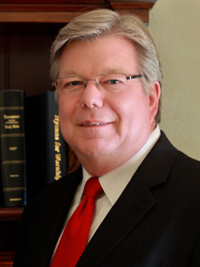 Tim served as the local evangelist for the Rio Grande Valley church of Christ in Belen, New Mexico from 1990 to 1997. He in preached in Kemp, Texas for the Kemp church of Christ from 1997 until 2014.

In addition to conducting gospel meetings, Tim conducts singing schools (Song Worship Training Series) in congregations around the country. Since 1989, he’s been serving as co-director at the annual Singing School (held in July) on the campus of Eastern Oklahoma State College in Wilburton, OK.  In 2012, he started the “Song Worship Training Series” (held each June) on the campus of Florida College in Temple Terrace, FL. He has also co-authored and published several books, along with his father: “Rudiments of Sight Singing and Song Directing”; “Hymns for Worship Supplement”; “Where Roses Never Fade”; “Scripture and Song for Worship & Devotions”; “Worshipful Hymns and Stories”. In 2005, Tim and his dad founded R. J. Stevens Music, LLC in order to publish their own hymnals, gospel recordings and song worship training materials for men, women and children. The same year, he and his dad produced a song worship leader’s instructional DVD entitled, “Let Us Sing,: Song leaders Instructional DVD Set”.  Tim was also a member of the Favorite Hymns Quartet for 30 years – which produced a total of 15 a cappella recordings.